A major concern is that the White House could move to repudiate the Iran nuclear deal, which Mr. Tillerson’s designated successor, Mike Pompeo, vehemently opposed. 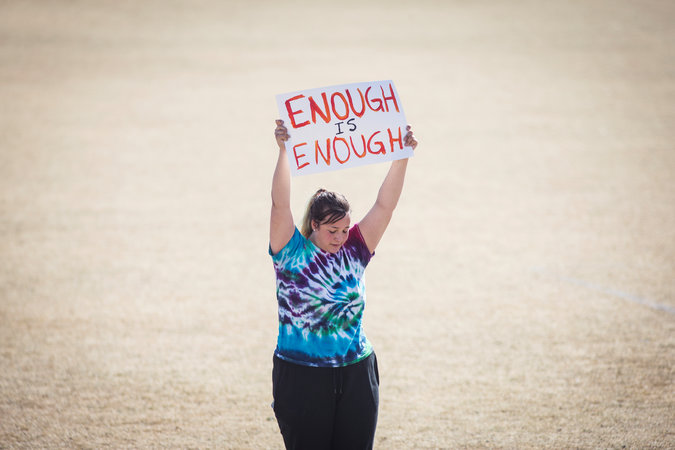 • Across the U.S., thousands of high school students walked out of class as part of a nationwide protest meant to pressure Congress to pass gun-control laws.

A Democrat scored a razor-thin upset in a special House election in what had been a Trump stronghold in Pennsylvania.

• Norway is confronting a now painfully common question: How soon is too soon for a movie rendition of a real tragedy?

There is consternation over “U — July 22,” a new film dramatizing the deaths of 77 people in attacks by a right-wing terrorist in 2011. (Above, the director and an actress at the Berlin International Film Festival.)

Meanwhile, Turkey’s decision to stop funding a Turkish-German film festival is seen as a sign of Recep Tayyip Erdogan’s efforts to uncouple Turkish culture from Europe.

And in other entertainment news, Netflix producers acknowledged that Claire Foy, the queen on “The Crown,” was paid less than her onscreen husband.

• Stephen Hawking “taught us a lot about how to live,” our science reporter wrote in an appraisal of the extraordinary life of the British cosmologist, who died Wednesday at 76.

Here’s a brief history of Dr. Hawking’s work, six cultural moments he inspired and some of his most memorable quotations.

• Tech industry leaders are increasingly attuned to the power they wield over our lives, our columnist writes.

• Elizabeth Holmes, once a Silicon Valley wunderkind, is facing fraud charges. She had captivated investors and the public with her blood-testing company, Theranos.

• An upstart Chinese oil company mingled with European politicians and struck major deals. It now appears to be in trouble.

• Here’s a snapshot of global markets.

• Heavy monsoon rains could soon bring misery to the more than half a million Rohingya living in the world’s largest refugee camp in Bangladesh. [The New York Times]

• Slovakia’s prime minister, Robert Fico, is said to have offered his resignation in an effort to avert early elections. [Politico]

• A rapprochement between Kenya’s political archrivals has drawn international praise but offers little comfort to victims of political violence. [The New York Times]

• “A celebration of indecency” is how a semiofficial Iranian news agency described a recent girls’ dance recital in Tehran. It may have cost the city’s mayor his job. [The New York Times]

• Facebook said it had taken down several pages with large followings associated with Britain First, a far-right group. [The New York Times]

• A baker in France was fined 3,000 euros. His crime? Failing to close once a week, as local laws require. [The Guardian]

Tips, both new and old, for a more fulfilling life.

• Recipe of the day: Keep dinner comforting with a recipe for chicken and rice.

• Here’s how to protect a laptop after it’s been stolen.

• “The truth can be hard to look at,” reads the introduction to an exhibit in London of images from the world’s hot spots by five New York Times freelance photographers. “But we ignore our neighbors’ misery at our own peril.”

(Above, residents of Mosul, Iraq, lining up for food and water.)

• Our lone reporter at the Winter Paralympics reflected on his assignment: Focus on athletes, not impairments.

• Portrait artists once played the role of today’s top Instagram stylists: offering the priciest form of self-promotion that money could buy.

• In the Champions League, Barcelona advanced to the quarterfinals, putting it on track to again win three major titles in a season. Bayern also qualified.

• Seven of the world’s 10 happiest countries are in Europe, and Finland tops the list, a new survey says. And national happiness appears to be strongly linked to that of a country’s immigrant population.

It was an offer that the Times film critic Vincent Canby couldn’t refuse.

“The Godfather,” which opened in New York on this day in 1972, was “one of the most brutal and moving chronicles of American life ever designed within the limits of popular entertainment,” he wrote in his review.

The adaptation of Mario Puzo’s best-selling 1969 novel was directed by a young Francis Ford Coppola. He was selected after numerous other directors turned down the job, and in part for his Italian heritage.

The saga of the Corleones, an organized crime family in New York in the 1940s and ’50s, “The Godfather” became an almost instant classic. It was the top-earning film of 1972 and remains one of the highest-grossing (and most critically acclaimed) movies of all time.

Nominated for 10 Academy Awards in 1973, “The Godfather” won three, including Best Picture and Best Actor for Marlon Brando, who played Vito Corleone, the family’s aging patriarch. Brando famously declined to accept the award as a protest against Hollywood’s portrayal of Native Americans.

“The Godfather” was “a superb Hollywood movie,” Canby wrote in 1972, “scaring the delighted hell out of us while cautioning that crime doesn’t (or, at least, shouldn’t) pay.”

Your Morning Briefing is published weekday mornings and updated online.

Check out this page to find a Morning Briefing for your region. (In addition to our European edition, we have Australian, Asian and U.S. editions.)

Sign up here to receive an Evening Briefing on U.S. weeknights, and here’s our full range of free newsletters.